The separator is a component that is alleged to be able to separate physiological information from pathological information. The idea goes back to a patent application that was never registered. In the simplest case, it’s a cup or a built-in box with various preparations in which a wire is inserted.
It is claimed that the information filtered by the cup can be picked up with a kind of “antenna.” Everything imaginable has been tried as the contents of the cup. Quite apart from the fact that it is highly unlikely that an “energetically standardized being” could be plugged into a box (just think of the huge amount of irritation possibilities), physical considerations alone provide reason to rethink the concept: The separator is supposed to be a filter. From physics and mathematics, we know that filtering elements also require storage elements. In that case, does this mean that client information is stored during the filtering? Is this information really gone after the bioresonance application, or is there a residual effect as we know it from the “energetic imprint in water”?  This could even lead to strange effects, and we know of no separator manufacturer making responsible claims that no sustainable storage of information remains in the separator.
Elsewhere, such a separator is called a “notch filter’ or the subtraction of “harmonious”/”“dissonant” (also called H, D, H/Di) information. Again, the physics and mathematics show the limitations. You cannot simply add or subtract sinusoidal oscillations and then expect something to be zeroed out. A glance at the mathematical formula is sufficient to see that this does not work—or only under one condition: The vibrations must be exactly in phase (or exactly inverse). And this goes even further: If two equal waves that are in phase are subtracted from each other, then a zero line will result. If one of the waves is inverse with respect to the other, then the result is twice the input wave. So, what we would like to know is who has managed to measure that the preparations in the box and the clients vibrate in the same way and that they are in-sync? Because the potential signals of clients are tapped at a random time (the time at which the bioresonance is turned on), the chance of phase equality is almost zero! How, then, should something be separated?
Our experiments show that it is more likely to be a tool with which to compensate for the unfavorable properties of the electronics for bioresonance (e.g., see notes on bandpass). Independent tests by, for example, Dr. Sturm (OIRF), Dr. Overbye, and others have shown that the Holimed devices do not need such dubious tools. 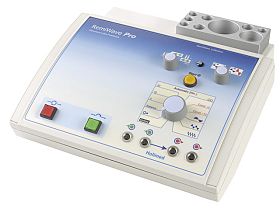 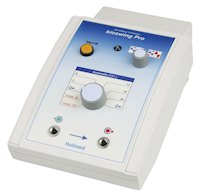