EAV is a method that operates by measuring values at acupuncture points and special EAV measuring points. Depending on the method used, there can be as many as 1,300 measuring points. However, over the past 50 years the procedure has been optimized several times. The fastest version measures 40 points on the hands and feet; the shortest uses only 20 points on the hands to gain an overview. An extended version uses 80 points on the hands and feet. More extensive schemes depend on which school of EAV is being followed. The desired EAV target value is 50. Electroacupuncture according to Dr. Voll tries to balance any other readings to 50 via the resonance test.EAV devices are used to measure the energy levels of these points. Although from a strictly physical point of view, it is the electrical resistance that is being measured, it is not possible to use an ordinary ohmmeter. This would shrink the working range of EAV to a small nonlinear scale.Dr. Voll developed a mapping function of specific resistance values that made EAV workable. This mapping function is a highly nonlinear function roughly in the shape of a tilted and elongated “S.” It maps the measured values on to a scale of 0 to 100. The middle value of 50 is the target value of EAV.In traditional EAV, the measuring current depends on the measured value and varies from 5 to 16 microamperes. When performing multiple measurements on the same point, this relatively high current often leads to imprecise readings. Additionally, the point may well fail to respond after a while.Therefore, even back in the 1970s, Dr. Kramer already strongly recommended reducing the current. However, at that time, this found no response and/or the available technology did not allow a more sensitive measurement. Holimed, however, took up this task in 1994, and by applying a complex value transformation and a modern electronic measuring method, we succeeded in introducing the new low current measurement method. All devices in the biocheck line are equipped with this mode that not only limits the current to about 2.5 microamperes but also holds the current almost constant over the entire measurement range. The last 20 years have shown that this low current mode permits many consecutive measurements at the same point that are both reliable and reproducible.The biocheck Pro EAV device additionally offers the old measurement mode. This is a convenience function provided specifically for users who are upgrading from old equipment to modern devices, because the “scale indicator feeling” is similar to the old device both at the beginning and during the transition phase. 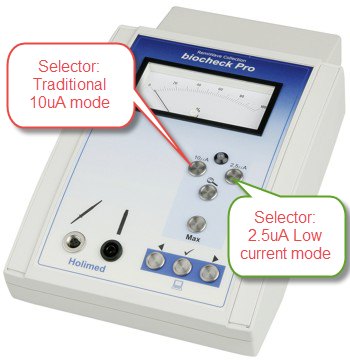 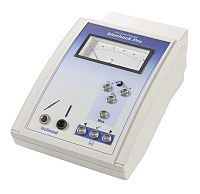